Soccer Moves like the fake control move - is performed at full speed when your soccer team owns the ball. It is a move usually performed during real soccer game to give ball possession advantage to your team. I used to perform this elegant soccer move myself as midfielder.

Here is a step-by-step how to perform the elegant soccer tricks:

1. The soccer ball is being played at full speed.

2. Your teammate is controlling the soccer ball coming towards you.

3. You anticipate by running fast to receive the ball from your teammate.

4. There are one, two, three, or more opponents on your left and right sides.

5. Rather than intercepting the ball, let it roll under your feet without touching it.

6. Then take with you all opponents to free enough space to your teammate.

7. Another teammate receives the ball behind you. 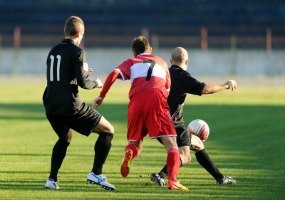 Use the fake control move when you are in full speed. Make sure you already “read” the positioning of your teammates and the opponents standing on your both sides. You can then fool and take with you all opponents around you.

I advice you to try the fake control move during practice with two teammates and two opponents. The teammate controlling the ball is in front of you. The second teammate receiving the ball is behind you. One opponent is on your left side and the other one on your right side.

Once you master the fake control move during the practice, try it during a real soccer game. You will be amazed how this move gets the fans on feet and screaming “Oh my”. Try the move when your opponents expect it the least.

I have developed and used the fake control move several times during my soccer career. As a midfielder, I was able to fool my opponents every time I used it and give advantage to my teammates.

I got inspired to perform this move by a Cameroonian national team midfielder Mbida Andantes. He was a smart, elegant, and efficient midfielder who used the fake control move all the time. I therefore pass it on to you. It is your turn to try and enjoy it.

Do you know a soccer move you can share with others? Then use this form.

"Go back to top of Soccer Moves - Fake Control Move "