Alphabetic soccer drills are a surprise to you right?  Running, movements, turnings a player is making in the pitch look sometimes as alphabetic letters. That was the reason I started using these drills when I was a young soccer player.

It occurred to me one day during a soccer practice to use these drills as a soccer midfielder. My goal was to remind myself of the best moves to initiate during a soccer game. I wanted to reign and rationally occupy the space of my soccer position.

That was the starting-point of developing this type of drills. It doesn’t mean these drills run from A to Z. I just created signs, symbols, or letters and workout through them to improve my soccer skills during a game.

It is my great joy to share this unique technique of soccer drills with the rest of young soccer players worldwide.

Why used this type of soccer drills?  Different reasons were behind the need for me to use these drills. First off, I wanted to master the basic movements and rotations I can use as a midfielder during soccer game or training.

The second reason was to apply the alphabetic soccer drills to the different soccer positions in the pitch. I thought it is possible to create limitless drills for any soccer positions be it goalkeeper, defender, midfielder, or striker.

These are the fundamental reasons I started developing alphabetic soccer drills. I mostly used the midfielder soccer drills when I was working alone to improve my skills and talents.

This is a good opportunity for me to share these drills. It is also a fun way to work with young soccer players in the pitch while they can learn some skills and enjoy playing at the same time. 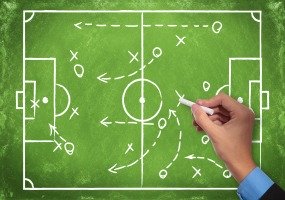 These drills apply to the midfielder players. As a former midfielder, I can assure, it is quiet physically demanding to run back and forth for ninety minutes in the pitch. I think this is the most exhausting soccer position.

A soccer midfielder should assist the defense line to stop any offensive from the opponents. When the opposition is leading an attack, the midfielder is going forward to attack and defend his team.

If it happens that the opponents crossed the midfield, then he should rapidly run to the defense line to assist his teammates. In return, when his team gets possession of the ball, midfielder should move as quickly as he can to the midfield to construct the attack of his team.

You can then imagine the movements of a midfielder in the pitch during a game. Running myself in these shoes of midfielder, I thought it was easy to simulate these movements by working with alphabetic letters. That is how I came up and used the different midfielder alphabetic soccer drills.

I should remind you that these drills are not static drills. Do not think you have to use them or reproduce them exactly as the alphabetic letters. The ball is moving all the time and soccer situations are dynamic in the pitch.

These drills help players to keep in mind the big picture of their movements according to their soccer positions in the pitch. Working with the midfielder drills, it was easy for me to create other  drills for goalkeeper, defender, and striker too.

Contrary to the midfielder, the goalkeeper does not run a lot during a soccer game. His movements and rotations are limited to defend his goalpost and stop any ball coming to him.

If you isolate the goalkeeper movements during soccer training or game, you will see that most of the time, he moves left and right, right and left, from the goalpost line up to the 18 yards box.

It happens sometimes that the goalkeeper must run out of the 18 yard box to counter a slalom offensive after a striker has beaten his defense. These are the frequent and repeated movements a goalkeeper will run during a game or training.

Looking at these lines of movements, it was easy for me to create goalkeeper drills.  Coaches can use them during the training to increase goalkeeper awareness of his rotations, turnings, and movements during a real soccer game.

Play as a defender can be a tough responsibility during a soccer game. This is where a fight between strikers and defenders is taking place. On one side, the offensive team is looking to score a goal. On the other side, the defense team is doing everything to destroy the opponent’s attack.

The defensive line is quiet tricky in a way that not only all defenders should attack the strikers, but they should play together to cover the goalkeeper. This is where it becomes interesting to create alphabetic drills and work with defenders during training sessions.

As a reminder who plays as defender?  You have 3 to 4 defenders called fullbacks. The central fullback is the defender just in front of the goalkeeper. He is sometimes called “libero”. In some soccer formations, you will find two central fullbacks in the pitch at the same time.

You also have the right and left fullback. Both play next to both central fullbacks. Soccer teams will use right and left wingback defenders. In this case, these positions are held by midfielders who will come to reinforce the defensive line.

Knowing the different soccer positions of a defensive line, it is up to your creativity to come up with different defensive drills. You can check the ones I have created and add your own as coaches according to your soccer strategies and tactics.

Like midfielders, strikers are moving a lot in the pitch. Their goal is to carry offensive and score a goal for their team. They have lot of responsibilities in the pitch and that requires different occupation angles of the field.

Usually you have a center forward who plays just in front of the opponent’s goalkeeper. A second striker is behind to assist him with any combination to carry an offensive. You have left and right wingers who play on boulevard spaces of the pitch.

You can also have an offensive midfield player to assist the strikers. These players are moving in the different spots and spaces in the pitch which guided me to create some striker soccer drills. 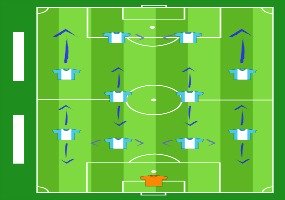 It is important to know the different soccer positions in the field for each compartment of the team: goalkeeper, defense, midfield, and attack. This will help you to create your own drills.

A combination of soccer positions, soccer formations can also be used to create a limitless series of striker alphabetic soccer drills. A player can use these drills during individual soccer training sessions.

A coach can work with his team on some alphabetic soccer drills to tune up specific tactics according to the soccer formation to be used in the field. It gives the coach, the players the opportunity to improve the overall space occupation of the field and the ball circulation among the players.

Using these drills is easy as creating them. It requires your own creativity and the goal you would like to achieve in the pitch individually or as a team. I can assure you I did not see yet another coach using alphabetic soccer drills.

This is an untapped area of soccer which will revolutionize in the future how to work and train young soccer players. Alphabetic soccer drills are fun, efficient, and easy to use by any player of any age.   To learn more about these drills, check out our eBook.

You're invited to visit the home page of Youth Soccer