Some interesting facts about soccer should be known by young soccer players. What are the five biggest soccer stadiums in the world in term of capacity? Your soccer curiosity should lead to these soccer facts.

Every young soccer player should be able to cite the first five or ten biggest soccer stadiums in the world. As a young player, I was personally always curious to learn real facts about soccer.

I share with you the same experience. Learn about soccer on and off the field. It will always help you to learn more about soccer. This can drive your soccer passion to play one day in one of these five biggest stadiums.

This stadium is in Pyongyang, North Korea with a capacity of 150 000 seats. It is a multi-purpose stadium completed in 1989. It used for mass games and soccer matches too.

Its name comes from the river Rungnado Islet in the Taedong River, and May Day, the international Labor Day. This stadium is famous for holding massive performances and shows to celebrate Kim Il-sung and his nation.

Rungrado May Day stadium is also known as a dark site of human right violation in North Korea. In 1990, a number of North Korea army generals were executed by burning in this stadium. They were accused of an assassination attempt of Kim Il-sung.

Also know as Yuva Bharati Krirangan Stadium, it is located in Kolkata, India with a capacity of120 000 spectators. This is the largest soccer stadium in India, and the second largest in the world by capacity.

It is a multi-purpose stadium inaugurated in January 1984. It hosts different types of cultural events such as dance and music concerts. The Pre-World Cup Tournament in 1985 was hosted in this stadium.

Interesting facts about soccer for this soccer stadium.  Salt Lake Stadium is the home of the India national soccer team. Home games of four major local soccer teams are hosted in this stadium. In 2011, FIFA has ordered an international soccer game between Argentina and Venezuela.  Argentina won 1-0. 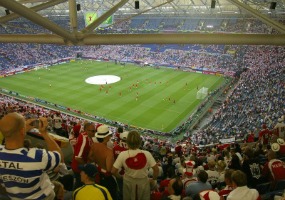 The third largest stadium is the world is located in Mexico City, Mexico. It has 107 494 seats.  Two soccer world cup finals were hosted in Estadio Azteca stadium: in 1970 Brazil versus Italy, and 1986 West Germany versus Argentina.

During my trip to Mexico in 1999, I was lucky to visit this stadium and other famous historical sites of Mexico such Azteca Pyramids.  The stadium opened in 1966 and was rebuilt in 1986.

interesting facts about soccer to retain for this stadium. This is where Pele and Diego Maradona during the 1970 and 1986 FIFA World Cup, have lifted the trophy for the last time.

Located in Kuala Lumpur, Malaysia, this is the fourth largest soccer stadium in the world with 100 200 seats. It was built in 1997 and hosted the Commonwealth Games in 1998 for its opening.

It is a multi-purpose stadium which has hosted important music events. Kelly Clarkson concert of her “All I Ever Wanted World Tour”, on April 2010 was held in this stadium.
Usher Live in Malaysia in 2010 was hosted in the same stadium.

Bukit Jalil National Stadium is the home of the Malaysia national soccer team. It is considered the best soccer field in Malaysia. The South Korean Rapper G-Dragon 2013 1st World Tour is scheduled in this stadium on June 22, 2013.

This stadium is in Tehran, Iran and has a capacity of 100 000 seats. It is considered as one of the most intimidating venues in the world for visiting teams. This is the home of the Iranian national soccer team.

The stadium was built to host the 1974 Asian Games. It is part of the larger Azadi Sports Complex where you can find soccer training fields, a weightlifting complex, swimming facilities, indoor volleyball, futsal courts, and other amenities.

Have A Great Story About Biggest World Soccer Stadiums?

Do you know other biggest world soccer stadiums in the world? Share with us.

You're invited to site the home page of Youth Soccer