These fun soccer drills will make training more enjoyable for your team, while raising their fitness and skill levels. They are the fun part of youth soccer drills.

Do you have any other fun soccer drills ideas? Please submit them to the site using this simple form. 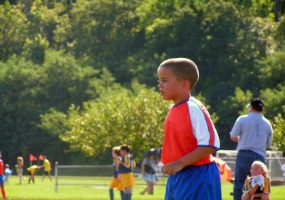 Fit soccer players may not be skillful, but skillful soccer players should always be fit. That's why it's important to including soccer fitness drills in your weekly routines.

It's important to get the balance right. Don't over-train for fitness and exhaust your soccer players, or they will not be able to focus on learning new skills in the technical training elements.

What you need: Two cones per player, and a “bleep” CD, tape, or smartphone app

The name makes this sound like it won't be much fun at all, and even seasoned athletes can shudder when recalling their first attempt at this intensive soccer conditioning drill. However, running suicides once or twice per week will rapidly spike up a team's fitness.

Set up two lines of cones about 20 feet apart. You can buy or download a “bleep” track, and also get apps for your smartphone that do the same thing. This plays a bleep sound at shorter and shorter intervals.

It starts off pretty easy, giving the players several seconds to make it from cone to cone. But it soon gets very challenging. You can make this into a more fun soccer drill by offering a prize for the last player still running.

This is another way to quickly spike up the fitness of your team. It's nice because it's non-competitive. The team runs together, building a collective spirit as they improve their fitness as a unit.

Set up cones at the corners of a square. A good way to start is from corner to corner of half a pitch, or if the players are younger, you could make the boundaries the halfway line and in line with the 18-yard box.

For older or fitter players, you can even set up the cones at all four corners of the soccer pitch.

The drill is simple. The team jogs together as a group. The team leader calls out a percentage as the team approaches the corner cone: we recommend 25, 50, 75 and 100 percent to keep it simple. As players reach the cone, they must break into a run based on the percentage just called out, and continue that speed from one corner diagonally across the box (one “diagonal”).

We recommend 8, 12, 15 or 20 diagonals per session. No matter how unfit and slow, you should encourage every player to complete each diagonal, and make the rest of the team wait at the cone and cheer them on.

To make this fun soccer drill harder, as your team gains fitness, end the diagonal run with push ups, burpees, or squat thrusts. If your team still finds this too easy, make the diagonal lines longer by making the sides of the square longer, or use the entire field, jogging to recover along the short sides only and sprinting the full diagonal of the soccer pitch.

What you need: A stopwatch and a whistle

All the coach needs to do is whistle every 15 seconds. Players who don't make it from box to box within the 15 seconds, three times in a row, should be allowed to sit out.

For very fit players or teams, extend the distance by making them run from goal line to goal line. Less fit, or younger, players can be made to run from the touchline on one side of the pitch to the other. 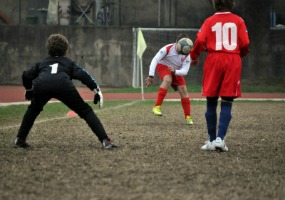 Enough fitness! Let's get some technical, skill-building drills to make the rest of practice a pleasure.

Drill: Two on one

Mark out a square with cones. Line up players at the center of the square. Two players from one line run to one end of the square (the attackers) and one from the other line (the defender). The coach passes the ball to one of the attackers.

This drill encourages off-the-ball positioning, awareness of a team-mate, and simple passing.

You can expand the square and play three on two, two on two, or three on three to add variety.

Line up six pairs of cones, about 15 feet apart, in two lines.

Position lines of players at each of the cones. The coach plays a pass to the first player at the first cone. He must take a single controlling touch, then pass to the player waiting at the cone opposite his. He then runs across to line up at the back of that cone.

The next player must take just one touch to control it, then play a pass to the cone diagonally opposite his, and run to line up behind that.

In this way, the ball moves down the line in N shapes. Once three passes are made, the coach can send in another ball, to keep the players moving and not having too long to wait.

What you need: a goal

Position a line of players on the 18-yard box, facing the goal. Have your midfielders (or anybody you want to improve their crossing skills) lined up near the corner flags, with a supply of balls.

Crossers take turns sending in high balls, and attackers must run onto the ball and either head or volley the ball into the empty goal.

This is one of the most fun soccer drills. Watching players either get to laugh at the mess the attackers make of their headers and vollies, or enjoy the goals going in.

If you have very young players, or low skilled players, bring the crossing players in closer. Be sure to mix up the players, so they don't get bored of doing the same skills time after time.

Fun soccer drills are exciting for young players. Use them to have fun and great time with your team during practices.